Home Celebs Culture Albrecht Durer: The Impact of Italian Culture on the Artist 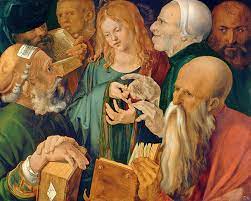 The painter Albrecht Durer is probably not as familiar to many “amateur” art lovers as some other Renaissance artists. But he was actually a leading and path-breaking artist of the German Renaissance. This was due to his visits to Italy and the impact of Italian culture and the Italian Renaissance on him.

Durer was a painter, printmaker, and writer during the German Renaissance. Still, he was in contact with the major Italian artists of his time, such as Raphael, Giovanni Bellini, and Leonardo da Vinci. As a result, you’ll clearly find the Italian culture’s effects in all his work.

In this article, we’ll tell you more about Albrecht Durer, the artist, and the person and briefly discuss and indicate how he succeeded in blending the Italian culture’s influences on him with German traditions and styles.

Albrecht Durer (1471-1528) was the son of a successful goldsmith, and he worked as an apprentice for his father from a very young age. From a very young age, he also showed extraordinary artistic talent, especially for drawing. He created, for instance, a self-portrait drawing when he was 13 years old. Because of his obvious talent for drawing, his father allowed him to start in 1486 as an apprentice to the painter Michael Wolgemut.

After his apprenticeship had been completed, he took about four years as “gap years” to learn skills from other great artists. He also undertook journeys to Italy and interacted with the great Italian Renaissance artists. He created his first painted self-portrait during that period.

As a result of his genius, skills, and contact with other Renaissance artists, Durer developed into one of the greatest artists of the time. Emperor Maximilian I became Albrecht Durer’s major patron in 1512. The Emperor commissioned “The Triumphal Arch.” Durer created this work by printing from 192 separate blocks. Apart from this monumental work of art, Durer created more than 800 works of art.

Durer’s personal life, however, was, to a certain extent, not so successful. His marriage was arranged by his father, and was not a very happy marriage.

There are quite a few interesting facts about Albrecht Durer, the artist known.

Famous Signature: Durer’s “signature” was on all his artwork. However, he “signed” the works by using a monogram – a large “A” and a smaller “D” between the two legs of the “A.” Many artists tried to copy the monogram to their works, and it was relatively easy to forge his work because he sometimes outsourced some of it to craftsmen. Emperor Maximilian I issued a charter making copying Durer’s works and signature illegal. It was to protect Durer’s artworks and monograms from plagiarism.

He created the first colour landscape: Durer travelled often to learn from other artists’ work. After a visit to Northern Italy, he stopped in the Alps on his way back to Germany, where he painted a whole series of landscapes in watercolor.

He received more appreciation in Venice than in his home country, Germany: In Venice, Durer was considered by other artists as a ‘divine’ artist who had received his qualifications by the mercy and to the will of God. However, in his hometown, Nuremberg, Durer was only seen as a master craftsman.

It is believed that Durer visited Italy in the 1490s because his “Self-Portrait at the Age of Twenty-Six” shows his familiarity with Italian artistic traditions. The ideas of the Italian Renaissance strongly influence the “Self-Portrait.” For instance, the geometrical forms and spatial divisions of the picture’s space through vertical and horizontal lines remind us of the works of the Italian artist Leonardo da Vinci.

It is known that during Durer’s second visit to Venice, from 1505 until 1507, he definitely studied Italian Renaissance masterpieces further. He was also introduced to newly developed art theories and read ancient scholars’ writings. Other similarities with the Italian Renaissance ideas are Durer’s use of warm colors and the soft transitions of tones. He also conveyed, like the Italians, depth, and plasticity through contrasts between light and shade. His blueing out of the landscape in the background suggests the use of the Italian atmospheric perspective.

Another Albrecht Durer work showing the Italian impact is “Portrait of a Young Venetian Woman,” created in 1505. The sensuous, golden-hued subject in the painting, with blond curls and a glistening necklace, is depicted in loose brushstrokes in a close-up format. This was a typical technique of the Italian Renaissance artist Giovanni Bellini.

One of the exciting facts about Albrecht Durer is that he never aimed to rival Italian art. Still, he wanted to fuse Italian influence and trends with the marvels of German naturalism. This fusing of the Northern art traditions and the Italian Renaissance developments made him unique and a significant influencer of other Northern artists.

Albrecht Durer created masterpieces and was one of the great Northern Renaissance artists. His fame and influence on other artists can be found in how he fused the ideas and styles of the Italian culture and Renaissance with German naturalism. He was familiar with Northern and Southern contemporary European art and established a visual language influenced by both styles. We hope our brief introduction of him will entice you to learn about Albrecht Durer, the artist, and his drawings and paintings.